I am deeply concerned, on a both personal and professional level, about food security. At the same time, I strongly believe that in order to educate citizens about an important issue, we must be as accurate as possible when disseminating information. And so, upon first glance two weeks ago, I and a number of like-minded folks in the region sent along links and tweets to our contacts about "When Healthy Food is Out of Reach," a joint report from D.C. Hunger Solutions and Social Compact. Sadly, it comes as no surprise that food deserts—here defined as an "area in the United States with limited access to affordable and nutritious food, particularly such an area composed of predominantly lower income neighborhoods and communities"—or "grocery gaps," exist in DC. Similarly, it comes as no surprise that, based on that definition, Wards 5, 6, 7, and 8 are the hardest hit.

The trouble I have with the report comes from the maps used to convey the District's food deserts, particularly Maps 3 and 4 on pages 15 and 18 of the report. Below is our annotated version of Map 4, "Food Deserts in the District of Columbia." 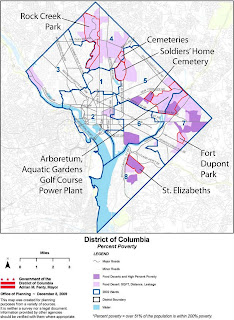 Click image to view larger map
What seems to have happened in the report is what Mark Monmonier calls a "Blunder that Misleads" in his book How to Lie With Maps. According to the report, the methodology for creating Map 4 is as follows:

Map 4 was developed using poverty data provided by the District of Columbia Office of Planning. The Office of Planning matched census tracts where 51 percent or more of the population lives at incomes below 200 percent of the federal poverty level with those tracts that have below-average access to full-service grocery stores (as identified by Social Compact in Map 3).

The blunder—not a lie but rather a "cartographic fallibility"—is that census block group data is used. Entire block groups are designated as food deserts that a.) have no living residents (cemeteries and parks, etc.), and so do not have much income and require no access to food, or b.) are institutionally used (hospitals, etc.), and so do not have much income but likely provide food on-site. Simply put, nearly 1/4 of the areas designated as food deserts may technically, but not realistically, fit the working definition.
Particularly during this time of increasing unemployment, homelessness, and hunger, advocacy groups across the District and the country are working overtime. Like many others, I want to help in the fight for social justice, but we need to be sure our data are airtight in order to effectively convey our messages.
Cross-posted at Greater Greater Washington.
Posted by jaime at 8:47 AM 9 comments

This scooter has been in our alley since Monday, March 22. Well, variations on the theme scooter, since each day more is missing, and more of its innards leak out into the Anacostia Watershed. 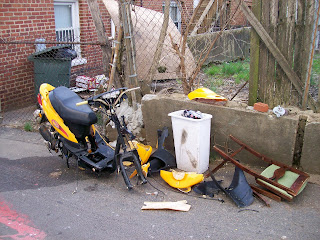 This is scooter, and scooter's friends, chair and wastebasket
But in all seriousness, the fact that this mess is still in the alley is painfully absurd. We called 311 on Tuesday to alert MPD of suspicion of stolen property. When the scooter was still there Wednesday morning—albeit slightly thinner—we submitted an online service request for alley cleaning via DPW. I think its safe to assume most folks reading this are tangentially familiar with "Broken Windows Theory." If not, at its nexus is the idea that if we fix problems in neighborhoods when they are small (i.e. literal broken windows, graffiti, litter), the chance for further petty crime and the potential for serious crime can be deterred. Don't fix the small stuff and, well, don't be surprised when problems mount on top of one another, the next one larger than the last.

So we have a presumably stolen scooter in our alley. If whomever deposited it wanted the tires before they dumped it, my guess is they would have taken them. Instead, someone else figured they could take them. And more bulk trash has piled up. So the cycle of broken windows, if even on the smallest level, is beginning to ramp up in our alley. And we can't get the city to help us by simply doing the job we pay them to do.
Posted by jaime at 11:42 PM 3 comments

Really Giant, this is the best you can do?

Now, while we promised in our introductory post the following:


That doesn't mean we'll hold back on the curmudgeonliness here, but we'll make sure that's not the only thing you'll read.

we didn't mean that there wouldn't be blog posts that were just good old complaining. How about this for an example?

This is an exterior sign on Giant grocery store #0375, near the Rhode Island Avenue Metro station, on Brentwood Road NE. The store, built in 2002, is having its interior upgraded using Giant's new corporate color scheme. It's good to see this much money being invested in a store that's under a decade old.

Many people in the neighboring Edgewood neighborhood complained when the Safeway at 514 Rhode Island Avenue NE closed, but the writing was on the wall the year before, when I noted that the store was the only one in DC not slated to receive upgrades. The fact that Giant is staying invested in the neighborhood makes it clear that they're not going anywhere anytime soon.

Now, with all that said, someone explain this to me: 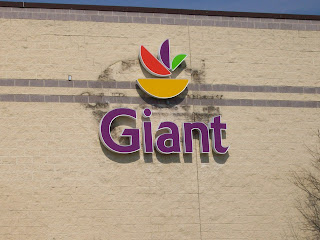 This is the new Giant logo that has replaced the sign you saw above. The grimy outline of Giant's old sign is clearly visible here. I just want to know why they didn't clean the wall before installing the new sign.

I mean, this is your face to the outside world, your potential customer's first impression, and you're going to do it half-assed? After spending hundreds of thousands of dollars upgrading your store, you'd think that Giant management would want to make sure to get everything right. This simple oversight—leaving the exterior looking unfinished—undermines all the other work they're doing. If you want me to come into your store, don't leave me with a first impression that screams "cheap".
Posted by IMGoph at 12:40 AM 13 comments

When I created bloomingdale (for now) in 2006, neighborhood blogs were flourishing in DC. Stories asserting that the Shaw neighborhood, just down the street from Bloomingdale, was the second-bloggiest neighborhood in the United States, were making their way around the Internet (though some disputed that assertion). It was a heady time to join this movement. Authors of other neighborhood blogs helped promote my writing and gave advice on how to make it successful. My goal—chronicling the goings-on in Bloomingdale—was made easy because the neighborhood was on the leading edge of a wave of change that was (and still is) moving across the city, spreading outward in all directions from areas that were traditionally more well-to-do, into areas with commercial districts that, for years, had suffered through disinvestment in much of the commercial and many of the residential properties.

In the years since, many neighborhood blogs in DC have come and gone. I shut down bloomingdale (for now) last year when I moved out of the neighborhood after buying a house in Trinidad. For a time, I considered creating a new neighborhood blog for Trinidad, but after giving that some serious thought, I decided that the neighborhood is already well-covered by Elise Bernard's terrific Frozen Tropics. I still plan to have many stories to tell about this neighborhood, but I don't want to be constrained to talking about only Trinidad, and I want to talk about topics that fall outside the neighborhood blog paradigm as well.

One of the things that I've earned a reputation for over the years is my propensity to rant and complain about things. I've been accused of seeing the cup half-empty (or worse) too often, of complaining for complaining's sake, of being a curmudgeon. 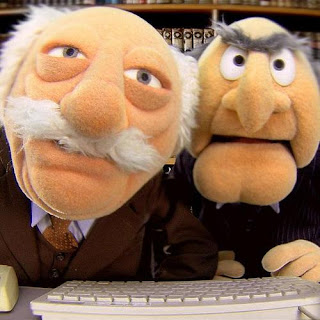 Your trusty bloggers—Jaime's the cute one
Wiktionary defines curmudgeon as an ill-tempered (and frequently old) person full of stubborn ideas or opinions. You know what—I think that (short of the old person bit) defines me pretty well. I have a lot of opinions about a lot of things in DC, and I'm not afraid to share them with anyone who will listen.

This past Sunday, Richard Layman made the following observation:

As Richard says above, there is nothing wrong with using the Internet as a vehicle for complaining about things. Unfortunately, quite a few blogs fail to go that extra mile and offer solutions to the problems they see, or to help the reader see deeper into the stories they publish. While we intend this site to be a vehicle for rants, we're not going to stop there. Along with my co-curmudgeon Jaime, we plan to dig into things a little deeper to find the reason why problems exist and to offer solutions where we can. That doesn't mean we'll hold back on the curmudgeonliness here, but we'll make sure that's not the only thing you'll read.

Unlike blogs like The Anti DC and why.i.hate.dc, The District Curmudgeon is not approaching this city from a position of hate, disgust, or even dislike. Count us among the ranks of ReadysetDC or We Love DC—we're approaching this adventure with a deep, abiding affection for this city, but we're not going to deny its faults.

So, get ready for what we hope will be a venue to look at our fair city, ways it falls short, and ways that it could be better. We hope you'll enjoy what we have to say!
Posted by IMGoph at 4:00 PM 21 comments