It's been a busy month, and it's been tough to find time to get anything posted, but I thought I'd start things back up with something very nit-picky, very curmudgeonly, and take a look at copy editing in a local newspaper.

Luckily, the papers published by Capital Community News are a veritable treasure trove of errors. A series of rotating contributors must certainly make it difficult for the editors. Without an established writing style to grow used to, it can be difficult to know what kind of errors to expect from one's authors.

The first in this series comes from the August 2010 [PDF] issue of the Hill Rag, which covers the greater Capitol Hill part of the city. The author appears to have difficulty with homophones, and I've highlighted three of them in the article below. 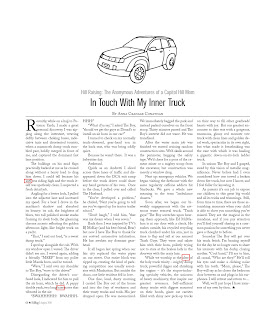 "Axel" is used to refer to an automobile part, "base" to discuss low-frequency music notes, and "alter" for a place to make a worshipful offering. It goes without saying that these words don't mean what the author thought they do.

We'll have more in the coming days.
Posted by IMGoph at 8:25 AM 4 comments

A couple weeks ago, New Columbia Heights and Prince of Petworth ran stories about the 6th anniversary of The Wonderland Ballroom, a bar located at the corner of 11th and Kenyon Streets NW.

Both blogs told a story about the period before Wonderland opened, with Andrew of New Columbia Heights saying, "When it opened, the Wonderland Ballroom was maybe the only place to get a beer in the area: I have friends who lived here before then, and the closest spot for them was Chief Ike's Mambo Room on Columbia Road in Adams Morgan, kind of a hike," and Dan of Prince of Petworth saying, "I hate to be that old guy who says “I remember when” but I remember when Wonderland was not open."

In both instances, they're leaving out some important history. A quick read of both Dan and Andrew's accounts could lead one to a false belief that no bars existed in that part of Columbia Heights before Wonderland opened. That is not the case.

This story raises the question of how in-depth a neighborhood blog should go to report a story. These outlets are not peer-reviewed journals, or even a traditional broadsheet newspaper with full editorial and research teams, so expecting a fully-researched story is unrealistic.

What makes blogs a unique form of writing, though, is the crowdsourcing aspect, where those reading can add to a story, and the author can update as more information is brought to the attention of all.

This is the model that Jaime and I believe should be standard for all neighborhood blogs, and is a reason why we were excited to join the TBD Community Network, because we saw the potential for many voices to come together and tell as thorough of a story as possible when reporting the news or items of interest.

A quick Internet search (or a glance at the Cultural Tourism DC sign on the street in front of the bar) finds that another bar existed at this location for nearly 50 years before The Wonderland Ballroom opened, and that bar was called Nob Hill.

Nob Hill was unique in that it was a black-owned gay bar, and until the time of it's closing in the spring of 2004, it could claim the title of the "oldest gay bar in Washington." Stories about Nob Hill exist in the archives of local publications like the City Paper and Metro Weekly. These stories note that the clientele was not exclusively gay, and the bar was open to all neighbors, though ownership did cater to black gay men.

The Metro Weekly article, published in May 2003, tells the story of a bar that is doing well financially, but a follow-up story less than a year later in February 2004 notes that the bar closed, apparently due to a fall-off in business. The story also seems to hint that ABRA helped to close the bar because of charges of code violations, which may or may not have come from neighbors moving into the neighborhood during rapid demographic change in the last decade.

Even though the bar is closed, it still holds an important place in the history of DC, especially in the gay community. The National Trust for Historic Preservation notes that a strong case exists for the site to be listed on the National Register of Historic Places.

(DC's official tourist website, washington.org, could stand to update things, though, as it states Nob Hill is still open.)

Only six months passed between the closing of DC's oldest gay bar and the opening of what would become its popular replacement. DC is full of rich history beyond the standard textbook stuff that happens on the Mall or Capitol Hill, and Nob Hill is one of those stories that we need to be reminded of, else we forget our past.

Harry Thomas Jr. has been an unremarkable and disappointing member of the DC Council, getting little done and having few noteworthy positions. In Ward 5, he has favored big-box and strip mall development over neighborhood commercial corridors.

For those neighborhood corridors, his leadership was primarily reactive in nature. In Brookland, for example, residents pushed for burying power lines during a major streetscape renovation, but despite verbal support, Mr. Thomas was ineffective at actually winning the change for the neighborhood. That project remains in flux two years later.

Mr. Thomas has continued many big box development initiatives begun under former Councilmember Vincent Orange without pushing for immediate improvements neighborhoods need. The Rhode Island Avenue NE Great Streets Initiative looks nice on paper, but some short-term facade improvement funds would be a huge boost right now for the corridor, and Thomas has not fought for that.

A new Aldi is under construction across from an existing, open Safeway in Carver Langston, but Thomas has done little to bring retail investment to Edgewood where another Safeway closed earlier this year. And rumor has it we may get a Wal-Mart where Jim Abdo once envisioned a mixed-use gateway on New York Avenue.

As chair of the Libraries, Parks, and Recreation Committee, Mr. Thomas seems to favor recreation over libraries, perhaps because of his athletic bent. He's directed money to Ward 5 recreation centers, but very little in the way of needed capital improvements have been made to the ward's two libraries.

Mr. McDuffie has a strong background, with degrees from Howard University and the University of Maryland School of Law and work history with Eleanor Holmes Norton, as an assistant state attorney in Prince George's County, a judicial clerk in Maryland's 7th Circuit, and a trial attorney for the Civil Rights Division at the DOJ. His background in policy and legislature will bring, according to the Washington City Paper's endorsement, a "wonkier style" to the job, but we believe it will also bring some much needed focus.

Regarding commercial development, Mr. McDuffie understands that continuing to focus on large-scale projects sets a potentially negative precedent for the ward. He told us, "The same $1.5 million allocated to the large, suburban-style development in Ft. Lincoln could go a long way toward revitalizing an existing small business corridor or attracting smaller-scale development to corridors like Bladensburg Road and North Capitol Street."

Related in many ways to commercial development, the improvement of food systems and access is critical to Mr. McDuffie, who supports efforts to bring healthy food to children. Councilmember Thomas was a leader of the charge against the soda tax, but didn't help provide any alternate revenue source for healthier school food.

Crime, particularly juvenile crime, continues to be an important topic throughout the city. Mr. McDuffie's experience as an attorney is evident in his thoughtfulness in addressing the many factors juveniles face before becoming delinquent.

Overall, Mr. McDuffie is able to identify current barriers to progress, including the real and artificial boundaries that divide neighboring communities. He believes in holistic methods to move beyond the status quo the ward has become accustomed to, and we believe he is the right choice for Ward 5 voters on Tuesday.

Cross-posted at Greater Greater Washington.
Posted by jaime at 10:10 AM 3 comments