The 700 block of 2nd Street NE is home to rowhouses and an enormous rear alley structure that are doomed to be destroyed. According to DCmud, these properties are owned by the Louis Dreyfus Property Group, who intends to tear the buildings down and construct a Planned Unit Development (PUD) which would consist of a large apartment building, among other uses, adding density to the neighborhood but sacrificing some of its character.

Where these buildings two blocks south, they would have been protected by the Capitol Hill Historic District: 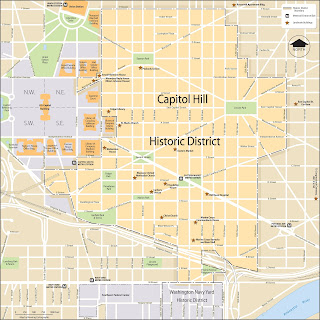 Map from the Capitol Hill Restoration Society website (PDF).
Ironically, DCmud states that part of the trade-off for these buildings' destruction would be that Dreyfus would pay for a study that could potentially lead to an expansion of the historic district (too late for these buildings, though). I stressed the potential aspect of this, because in recent years, we've seen attempts to establish historic districts fail as often as they have succeeded.

In the last week, fencing has gone up around the buildings (see pictures below). Take special note of the last photograph, which shows a large building in the alley, too large to call a carriage house. It appears to have been a light-industrial building of some sort (perhaps Richard Layman can chime in and give some more background about this building). Regardless, there are some solid structures that will be lost when they are finally torn down, to be replaced by something that I don't hesitate to say will likely not have any kind of the permanence many of these buildings have exhibited. 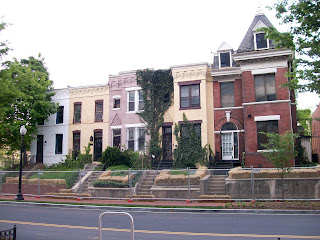 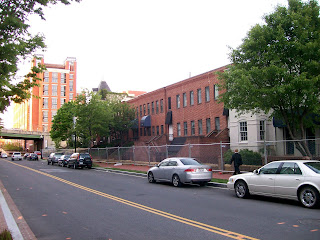 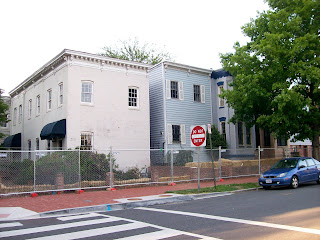 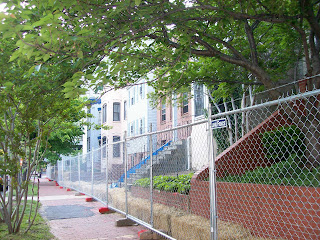 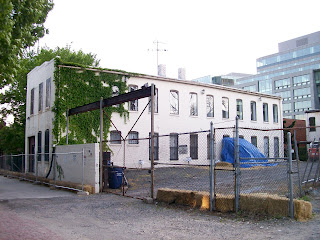 I've heard people argue that it's alright if we lose a historic building or two here and there. What's the big deal? DC has thousands of them! The benefits of increased density far outweigh the loss of historic residential stock.

But I have pointed out before on my old blog that we are constantly losing these old houses to neglect or, as Layman astutely points out, a malady he calls "blaming the building" (mentioned here as well). The chipping away of our historical housing stock is especially disturbing to me in neighborhoods where most of this housing still exists in contiguous blocks. Part of what makes Bloomingdale such a nice neighborhood architecturally is the fact that, block-by-block, the original houses are all still standing. Shaw, on the other hand, has many places (particularly along the streets that were decimated in the 1968 riots) where that continuity is interrupted by 'modern' public housing projects or commercial structures that stand out like sore thumbs in the streetscape.

Perhaps witnessing the loss of more old structures convinces people in neighborhoods to rally for historic district status. The residents of Barney Circle are leading the way. Hopefully more neighborhoods (like Eckington and Bloomingdale, Brookland and Chevy Chase) will take note of the potential losses and do what's necessary to keep their neighborhoods from being destroyed one house at a time.
Posted by IMGoph at 10:22 AM 13 comments

(This post has been updated. See below the jump.)

The 1200 block of Oates Street NE, unlike many other blocks in Trinidad, lacks a large tree canopy. There are some small- and medium-sized trees, but nothing like the full-grown oaks that line the 1200 blocks of Owen Place, Neal Street, and Morse Street nearby.

It takes decades for trees to grow to that size, but everything has to start sometime. That sometime appeared to be last month, as the city's Urban Forestry Administration (UFA) planted at least a half-dozen young london plane/sycamore trees on the western end of the block. 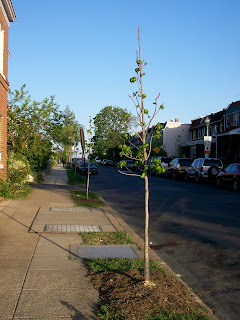 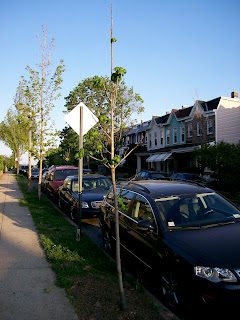 Here are a few of those young trees.
The trees were kind of spindly, with some branches that weren't leafing out, but they seemed healthy enough, and I thought that, with enough time and TLC, they would provide shade and enjoyment for our block for years to come.

Incidentally, I've been a citizen forester for Casey Trees for a few years, and one of the things that we do when planting trees that are "balled and burlapped" is to remove the twine, metal, and burlap that surrounds the tree's root ball so that the roots have a chance to grow and get established in the surrounding soil. After these trees were planted, I noticed that there was still twine and burlap wrapped around the base of these trees where they meet the ground. 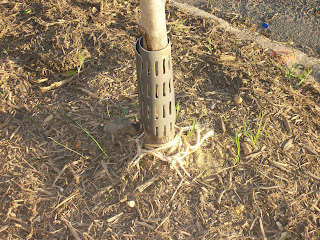 Example of the twine and burlap still visible at the young tree's base.
I was assured by the Ward 5 arborist not to worry:


UFA changed its planting specs last year. Leaving the burlap and rope on allows for the staking to be omitted, which can be problematic in many instances. The nursery uses a new highly degradable burlap and twine, so the traditional negative impacts are mitigated.

All of this discussion is temporarily for naught, though, as UFA removed most of the trees shortly after planting them. The Ward 5 arborist said that the trees were being removed to be replaced with higher quality trees. He said it would take a few weeks, so we sit waiting—a dream deferred. Below is the only one of the trees that was left on our end of the block. Hopefully it won't be the only one much longer! 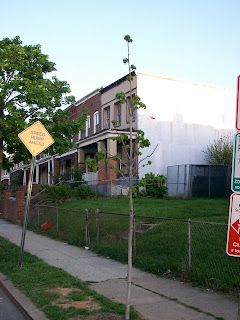 Here's an update regarding the pothole that would not die on the 1600 block of Montello Avenue NE: 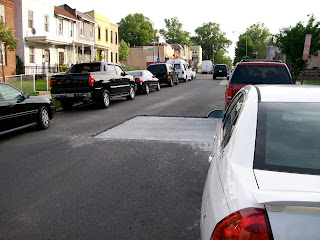 It appears to be gone! WASA said they would be drilling some holes in the vicinity to determine if the problem was related to groundwater or to a leaky valve nearby. Whatever it is/was, it appears that they found it. Water is no longer coming out of the road. There are a couple places further down the block here that appear to have been dug up as well. Now, if DDOT would just hurry up and properly add the asphalt pavement here, we might be able to say everything is fixed. I'll keep an eye on things in order to make sure this problem doesn't come back.