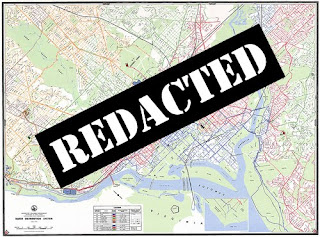 Well, in the "security" obsessed reality we live in, having something as simple as a not-very-high-resolution map of water pipes out there on the Internet is enough to make government-types wet their pants (water related puns—gotta love 'em!).

This morning, I received notice from Alan Heymann, the Public Affairs Director of DC Water, that the EPA contacted DC Water to let them know they believe the map is "sensitive information" and should not have been shared. Now, I'm not naive, and I understand the need for vigilance regarding threats to infrastructure in the nation's capital, but it seems to me that this kind of information doesn't add much value for someone looking to do harm to our water supply. The easiest places to do so, the open-air reservoirs at Dalecarlia, Georgetown, and McMillan are all well-guarded. Just try to take a photo at any of them, and a gruff person will threaten you with physical harm if you look in their direction for too long.

One of my mantras is "information wants to be free," so my initial response was to say, "Hell no, this is public property, and the public has a right to know about this." According to Flickr statistics, nearly 1200 people have taken the time to click on the largest version of the map, so the bird has flown the coop, so to speak, and the data is out there in the wild now.

But, Mr. Heymann has been a great help in solving the problem of 'Montello Springs' as well as offering the tour of the Bryant Street Pumping Station, so we've decided on a compromise. The highest resolution version of the map has been removed from Flickr, and we're including an annotated version below that shows the location of the reservoirs. You can still get the basic gist of our previous article from this map—that different sections and elevations of the city are fed from reservoirs that aren't necessarily the closest to that part of the city. That information is still readily available in text form on DC Water's website. 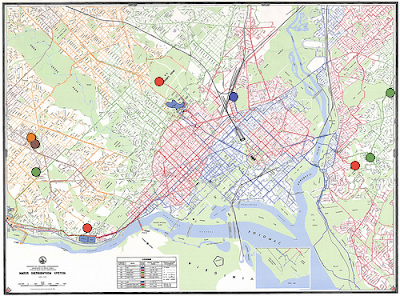 In thinking about all of this, Jaime discovered the EPA website called "MyEnvironment," where they tout "transparency, transparency, transparency" and openness, and discuss the sharing of maps and data with the public (http://dirt.asla.org/2009/09/08/government-2-0-epas-myenvironment/). In light of the recommendation to remove this map, we asked Alan Heymann if he feels that sites like "MyEnvironment" can ever truly meet the goal of openness? Should government agencies set explicit limits on what is appropriate to share? Here's his response:


I agree that generally, more information is better than less information. Many District residents don’t know much about the facilities and the agency that supply their drinking water, which was the idea behind the bloggers’ roundtable that you attended last week. Likewise, not everyone gets a chance to visit the inside of a pumping station, but you have the ability to take your audience there through your photos and words.

The General Manager and the rest of the team were pleased to see your informative, thoughtful take on the distribution system on Tuesday. At the same time, especially because this is the nation’s capital, we need to be mindful of security concerns. When the U.S. EPA mentioned to us that the posting of a detailed map online might put sensitive information into the wrong hands, I made the request that the map be removed from your post.

As you mentioned in the earlier post, our new name and logo are just part of an effort to connect with our customers in ways this agency has never done before. However, in hindsight, I probably erred a little too far on the side of openness and transparency in providing a high-resolution map of the distribution system for the web. I appreciate greatly your cooperation in agreeing to take it down, and I want to thank the GGW readers for their understanding as well. I’m looking forward to collaborating with you on future posts.

Where does your DC Water come from?

On Thursday, June 17th, I was invited (along with other local bloggers) to a roundtable with the General Manager of DC Water, George S. Hawkins.

Mr. Hawkins spoke about the culture of accountability that is being nurtured at DC Water (formerly known as the DC Water and Sewer Authority / DC WASA), discussed the ongoing lead-in-the-water saga, and spoke at length about his interest and excitement regarding all things environmental (he was formerly the head of the District Department of the Environment). Other bloggers have covered many of these points well, so there's no need for me to rehash them here (though I do know that a Greater Greater Washington post which will touch on a few other points is currently being worked on, and I will add a link to it when it's ready).

I'd like to take the time to share with you one of the fascinating things that we learned during our tour of the Bryant Street Pumping Station. If you read the information at that link, you can learn about the seven service areas that provide water to the residents and businesses of the city.

Briefly, all the water we use comes from the Potomac River near Great Falls, is treated at the Dalecarlia Reservoir by the Washington Aqueduct (a division of the U.S. Army Corps of Engineers), and is then sold to DC Water. That water is then pumped to reservoirs all over the city. The reservoirs are located at different elevations, and they supply water to points below them. From those reservoirs, the water flows downhill (via gravity) to houses and businesses.

Check out this great map: 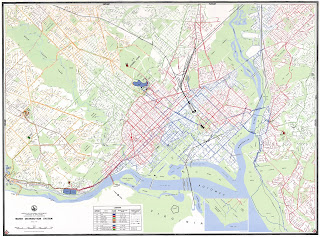 (Click on the map to view larger.)
The legend at the bottom of the map shows the color-coding which indicates the approximate elevation of different parts of the city. As you can see, blue water mains run along roads at the lowest elevations (between zero and 70 feet above sea level). Red water mains are located at the second elevation range (between 70 and 140 feet), green at the third range, orange at the fourth, and brown at the highest elevations. The red and green areas east of the Anacostia River are separate zones than those west of the river, while the lowest zone (blue) spans both sides of the river.

What fascinated me the most was the fact that this means that the reservoir that serves your house isn't necessarily the one closest to your house, or even in your quadrant of the city! For example, our house is in Trinidad. While the closest reservoir is at Brentwood Parkway and New York Avenue (just north of Gallaudet University), we are served by reservoirs in Berkley and at the Armed Forces Retirement Home, both across town in the Northwest quadrant of the city. The reservoir nearest our house serves locations at the lowest elevations (below 70 feet), from lower Georgetown and Southwest in the west all the way to Rosedale and Deanwood in the east.

Some other examples of reservoirs and the neighborhods they serve:
Neighborhoods east of the Anacostia River have had a persistent problem with lower water pressure. DC Water is looking to rectify that with the construction of the new reservoir and pumping station in Ward 8. The construction of the new Department of Homeland Security headquarters on the campus of Saint Elizabeths will greatly increase demand for water in that part of town, and Mr. Hawkins said it would be a win-win for the neighborhood and DHS to get the new reservoir built as part of the new construction there.

Cross-posted at Greater Greater Washington.
Posted by IMGoph at 11:00 AM 0 comments

One more example of a horrible map

OK, we're going to have some real, honest-to-goodness posts very soon, but to tide you over try this on for size:

Since the last District Curmudgeon post was about maps, I thought it would be a good idea to point out another one that's been bugging me for months now. The above series of maps is used in the Express newspaper to highlight the locations of news stories, often for the "Weekend Review."

Look at that map on the right, though. I realize this is meant to be a generalization, but there's no good reason for the map to be done as poorly as it has been. Here are the biggest problems I see—feel free to add more critique in the comments below:
You can find lots of strange things going on in the Eurasia and North America maps as well. Wouldn't hurt to have Madagascar on the Africa map too.

C'mon, Express, spend 5 minutes and make a more accurate map for your readers. There's no need to publish something this inaccurate and misleading.
Posted by IMGoph at 1:33 PM 1 comments

There are better cartographers out there 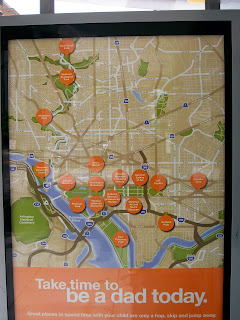 This map can currently be found at bus stops all over Washington, DC. It's an advertisement for the National Responsible Fatherhood Clearinghouse, a government organization that "supports efforts to assist States and communities to promote and support Responsible Fatherhood." The sentiment is more than admirable, it's crucial: if you're a dad, spend time with your children. The poster/ad shows places where one can go out and have fun at any number of neat, free parks all over the city.

Of course, as a cartographer and a curmudgeon, I have a few gripes. The design leaves more than a little to be desired. Why are there drop shadows on the orange circles used as labels for the parks, but no shadow on the part that points to the locations? The linework used for the roads is clunky, and there are some terrible transitions from one level of road hierarchy to another (like where Virginia Avenue NW ends at the Rock Creek and Potomac Parkway). The interior glow on the bodies of water and the parks seems like an unnecessary embellishment. But the biggest problem is the labeling of roads.