Over the course of the last 5 days, I've seen 4 bicycles with parts stolen at both entrances to the New York Avenue/Florida Avenue/Gallaudet University Metro station. As always, we document this to encourage people to be vigilant when parking their bicycles here. The station remains a risky place to leave one's bicycle.

Here was the bike parking situation at the northern entrance to the station yesterday morning. Looks orderly, right? 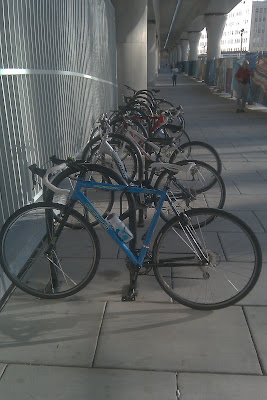 Unfortunately, there were two bicycles that had stolen parts (wheels, derailleurs, etc.) because they were poorly secured. Construction of the newest phase of the Constitution Square buildings has made the area less visible from the street and station entrance. This makes it easier for would-be bicycle thieves to do their dirty work. 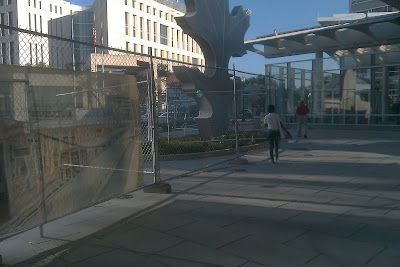 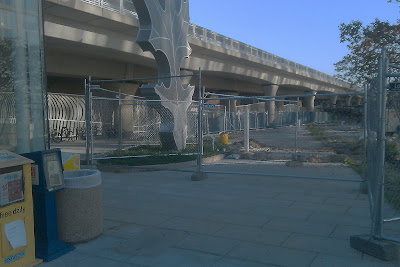 In the interest of education, here are all the bikes at the racks yesterday morning. Let's see which ones did a good job locking up and which ones did not. 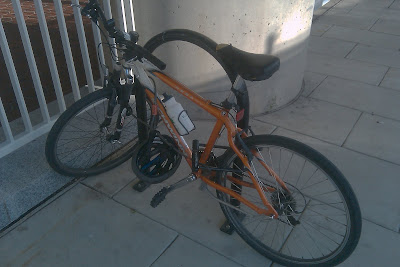 The above bike has a u-lock through the frame and rear wheel, with a cable lock looping through the front wheel and around the inverted U bike rack. 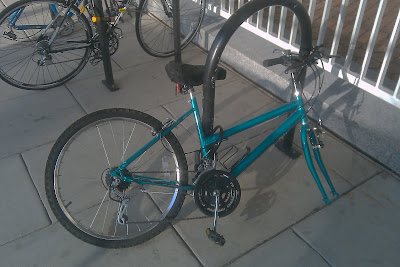 The second bike only has a u-lock connecting the frame to the bike rack. The front wheel has been stolen, and the rear wheel is probably going to be taken next. 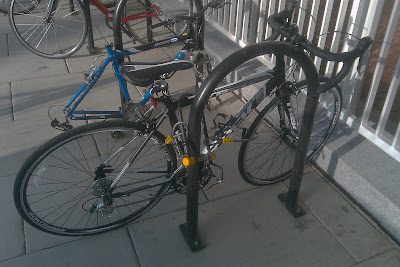 The third bike has a u-lock connecting the frame to the bike rack, and two cables securing the wheels. Not quite as secure as the first bike, but still quite good. 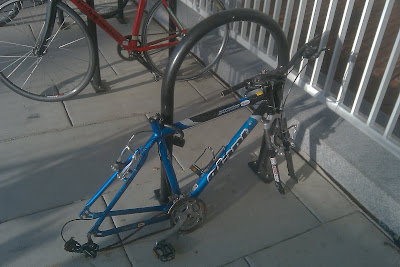 The fourth bike is an example of what will probably happen to the second one. Both wheels and the saddle have been stolen because the lock only secured the frame to the rack. 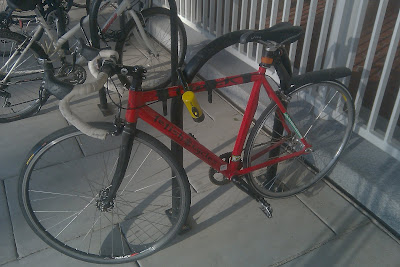 This bike only has the frame connected to the rack. The sticker on the bike says "This machine kills fascists," but it won't be able to do so if it continues to be locked up poorly like this. 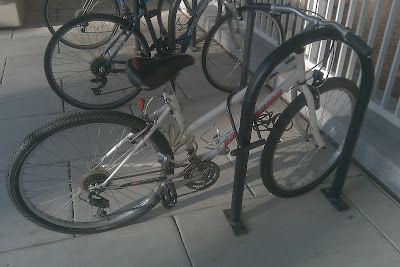 This bike has both wheels secured with individual cable locks, and the frame locked to the rack. I'd probably run the rear cable through the u-lock, but this appears pretty secure. 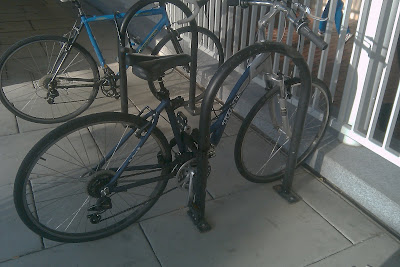 This bike has a heavy chain lock securing the frame and rear wheel to the rack. The front wheel is vulnerable, though. 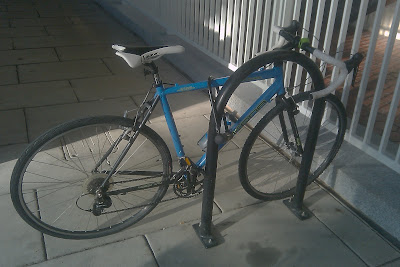 Finally, the last bike. 'Secured' with a u-lock on the frame only. Another candidate to come home at the end of the day to an unhappy surprise.

Over the course of the last year, I've noticed more cyclists doing a better job of locking up their rides. Clearly I'm not the only person who sees that there are problems with security at the New York Avenue station, but there is still much that could be done to make things better. When the construction is done, more pedestrian traffic could help discourage those who would vandalize bikes. The biggest help, though, would be for WMATA to implement a bike garage inside the turnstiles at this station.
Posted by IMGoph at 2:56 PM 2 comments