DDOT photo of the old Sears building on Bladensburg Road

I was poking around in DDOT's photo archive on Flickr last night, and I came across the following photo:


It's a picture of the construction of the Southeast/Southwest freeway through Capitol Hill in the late 1960s. It's a stark reminder that the freeway cut a neighborhood in two, and it's a scar that we'll likely continue to have for decades to come.

What caught my eye, though, was the bright patch at the top of the photograph. I've cropped that section out, enlarged it, and circled the interesting spot below: 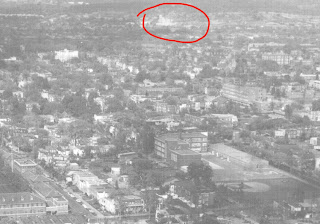 You can click above to enlarge it even more. I'm pretty sure this is the old Sears, Roebuck & Co. building. (At that link, you can see a photograph of this amazing Art Deco building, which was still standing until the late 80s/early 90s). It was located on Bladensburg Road, just north of the Starburst intersection, across the street from Trinidad. It's now the location of the Flats at Atlas apartment building, which is better than a vacant lot, but certainly not as cool as a repurposed Art Deco beauty would have been.
Posted by IMGoph at 9:18 AM 0 comments

To start with, the name is ridiculous. The buildings were built in a long-established neighborhood (Eckington [PDF], since 1830) that just happened to have some empty lots. The business improvement district (BID) to the south is called NoMa, and it includes a few of the commercially-zoned lots at the southernmost extent of Eckington. The developer decided to use the NoMa name for the complex, most likely because they felt it was a "brand" they could exploit.

The contact page for the complex, though, says these are "Apartments in Chinatown DC - Trilogy at Noma DC Chinatown" at the top of site. Clearly there is some confusion on the part of the ownership regarding where they made their investment. I wonder if they know the city and neighborhood well enough to know where they're actually located.

What "drove" me to write this post, though is the photo below: 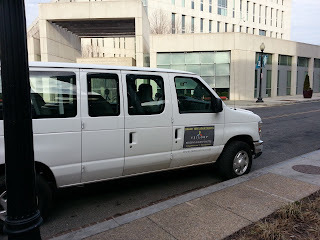 That contact page touts the Walk Score for the apartment complex - a respectable 71. (Worth noting - the Transit Score is a 72 and the Bike Score is a fantastic 89!) It's questionable if the management really believes in that Walk Score, though, since they have a shuttle van to drive you the two blocks to the Metro station.

Sure, a shuttle service for handicapped residents might be necessary and a nice service for those who need it. But this van, dropping off passengers at the northern entrance of the NoMa station, wasn't equipped for wheelchair access, and the twenty-somethings disembarking from the van appeared to have no problem walking the few feet from the van to the turnstiles.

A solid low-stone retaining wall is about to become part of history (probably tomorrow). Do you know any stone masons in DC who could use this material? Let them know as soon as you can! Read on for more...

Titan of Trinidad noted that the church at the corner of 14th and Maryland NE has finally been demolished. This is the first step in the construction of the new "Maia" apartment building that will be built in its place.

I'm writing about the detritus of the construction project, though. As you can see from these pictures, there are thousands of bricks, many of them already broken into shards, remaining on site. There are many who would gladly take solid, century-old bricks to reuse them for other projects, but I'm afraid that it's probably too late for most of these solid pieces of history. We don't value recycling and reusing in this society to the extent that we should. 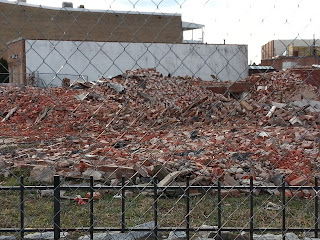 I'm concerned about this stone retaining wall that encircles much of the property. Surely the demolition crews will be removing it very soon. This is the kind of thing that simply isn't built these days - people use cheap cinder block construction for retaining walls instead. 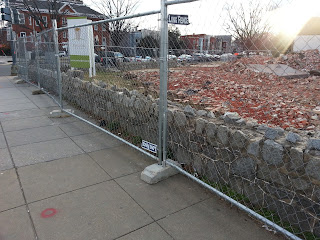 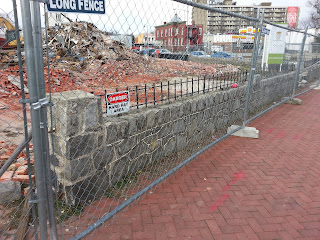 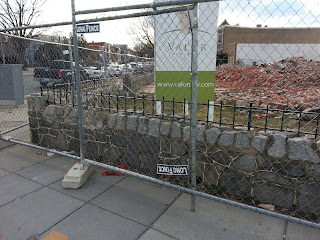 There must be a stone mason in the DC area that would be interested in getting their hands on this material. I imagine someone could take this wall apart relatively quickly (certainly not as fast as a backhoe, but let's be realistic here!) and reuse the material elsewhere.

If you're reading this and you know someone who might fit this description, please pass the story along. I'd love to see some of this material reused instead of becoming backfill for a pit somewhere.
Posted by IMGoph at 10:04 PM 0 comments