There is a beautiful, classically-designed neon sign in front of Mac's Tire Service at 423 Florida Avenue NE. It's been there for a couple months, but I thought it deserved a little special attention. 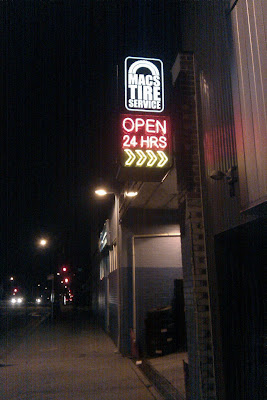 Last summer, the Washington Post ran a great story on Mac's Tire Service, which touts itself as the only 24-hour tire service center in the metropolitan region. The story included a video and photo gallery with Dennis Parker, a mechanic at the shop. 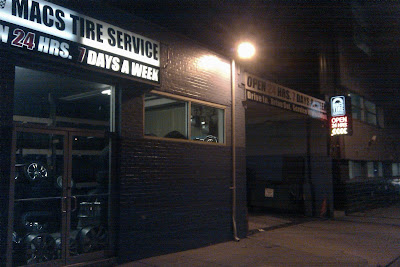 Consider this a reminder that there are people worth knowing, respecting, and appreciating in the gritty parts of DC that the world doesn't pay attention to every day.
Posted by IMGoph at 11:12 AM 3 comments

When DDOT completed the reconstruction of the intersection of New York Avenue, Florida Avenue, 1st Street, O Street, and Eckington Place NE (known by some as "Dave Thomas Circle"), they included plastic bollards in the part of the Florida Avenue roadway immediately east of the intersection to control traffic coming out of the somewhat blind corner with 2nd Street NE. Unfortunately, those bollards need maintenance and replacement, and DDOT needs to step up to keep this intersection safe.

On August 22, 2011, I sent a 311 request (number 11-00259888) for bollard replacement. Many had been run over or were missing, and I frequently observed dangerous and illegal turns. The request wasn't resolved for over 3 months. On December 2, 2011, I received the short reply "NO WORK NEEDS TO BE PERFORMED. PER VICTOR N." 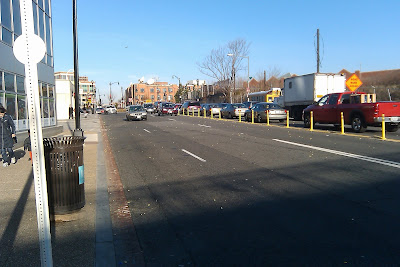 As of this morning, it appears that a vehicle ran over many of the remaining bollards. Debris is scattered all over the roadway and adjoining sidewalk. Bollards are either missing, snapped in half, or have been pushed off their moorings and are certain to fall under the wheels of passing vehicles sooner or later. Someone has taken the time to collect a few bollards and place them behind the guardrail that keep traffic away from the nearby rail overpass. 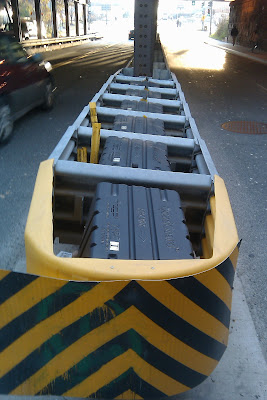 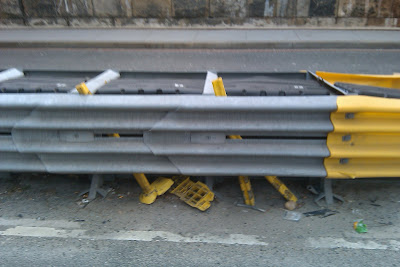 This intersection will likely be reconfigured when the Washington Gateway development on the north side of the block is completed, but it's doubtful that will happen in this calendar year. In the meantime, I hope DDOT will go out and make the simple repairs necessary to keep this intersection safe for those driving, cycling, and walking through it. They've certainly shown to be responsive about simple things, like updating road paint, that make a big difference, before.
Posted by IMGoph at 11:00 AM 0 comments