Update from WASA—and more water springs forth from the Earth

Over the last month, I've learned quite a bit about the terminology involved in the repair and upkeep of our city's water delivery system. The back-and-forth that I've had over email with WASA has been enlightening.

It all started with an angry Tweet from me on March 9. WASA's Twitter feed, to that point, was simply a way of forwarding occasional notices for city blocks that would be subjected to a "work zone" that day. After witnessing how well DCRA interacts with the public on Twitter, I was spoiled and believed that every city agency should communicate in the same way (I still DO feel that way).

Shortly after that angry Tweet, WASA announced that it was going to start two-way communication using its Twitter account. Can I claim that I was responsible for this flowering of openness? Probably not, but I like to think the attention helped get them moving forward.

Anyway, after yesterday's post regarding the mysterious leak on Montello Avenue NE in Trinidad, I received another follow-up from Alan Heymann, WASA's Public Affairs Director:


Our Director of Water Services spoke with the various foremen who have been involved with work in the 1600 block of Montello Ave. Here is what he heard, and what we plan to do next.

DC WASA repaired a leak further north toward Raum Street. When shutting off the main to do the repair, the crew found the valve at Montello and Raum to be defective. Water Services then scheduled a shutdown to replace the valve. When water on the 1600 block of Montello was shut down for the valve replacement, the water surfacing in the middle of the block did not stop. We tested the water from the street for fluoride, because groundwater, treated drinking water and wastewater typically have different levels. This often helps us determine what kind of water is surfacing. Because the sample revealed little fluoride, and because the water didn’t stop when we shut down the main, we determined that the source was not a WASA pipe, but groundwater. When we encounter groundwater coming to the surface, we work with DDOT to reroute it into a drain.

As a result of your post, we are expanding the investigation. An investigation crew will listen for a leak along Holbrook Terrace and Meigs Place today. If any sounds are detected, a crew is scheduled to return tomorrow to drill test holes over the main to try to pinpoint the source of the sound and determine if there is a leak. If no sound, the crew will excavate south of the existing pothole and observe how the water is entering the excavation. While the hole is exposed, we will shut down the mains in Holbrook Terrace and Meigs Place for a short duration to see if the water stops or slows down. We will also take another sample.

Therefore, we will not do any excavating until Thursday.

This is exciting, and it'll be interesting to see what WASA and DDOT end up having to do to get this fixed.

Not wanting to pile on the requests regarding water coming out of the woodwork in our neck of the woods, but when they've figured out what the deal is on Montello Avenue NE, there is this little situation on Mount Olivet Road NE between Gallaudet University's campus and Ivy City since at least last September... 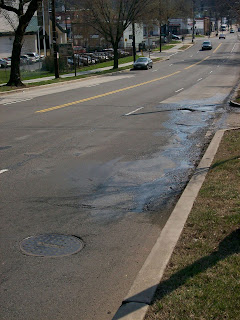 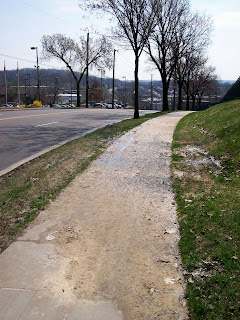 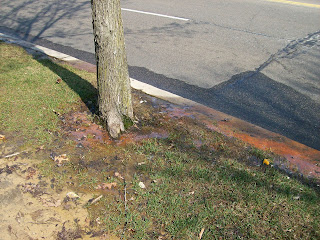 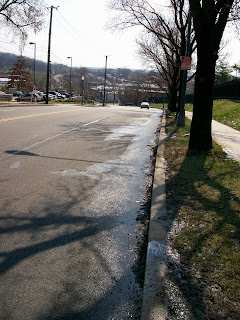 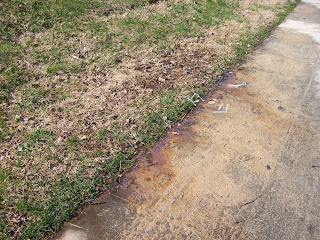