Is the owner coming back for this bicycle? 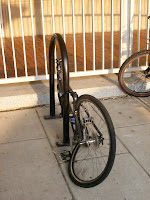 Take a look at this bike. It's missing its handlebars, seat, front wheel, brake and shifting cables, front- and rear-brakes, and chain, while the back wheel has been stomped into a useless mess. It sure doesn't appear to be wanted by anyone at this point.

This is at the New York Avenue Metro station, where the bike racks are not up to code anyway, and they often fill up. Parking is at a premium here, but this mangled used-to-be-a-bike has been here for a couple weeks now.

Wednesday evening, I spoke with a station manager, asking if he knew what to do to get the bike removed. First, he told me that he, as a station manager, has nothing to do with the bike racks (they are on WMATA property—whose job is it to "manage" them?). He said I should find a member of the Metro Transit Police Department to speak with. As I walked away, he claimed that, no matter what, if the frame is locked to the rack, WMATA will consider the bike "in use," and they won't be able to touch it.

That's clearly ridiculous. The lock should be cut and the frame should be donated to a group like Phoenix Bikes or someone else who can turn this into something useful again.

I put a call in to the MTPD as I left the station, and was told that an officer would stop by to assess the situation. As of Thursday morning, nothing has happened. We'll see how long this takes to be removed. 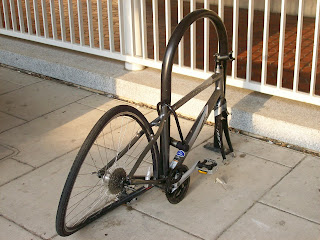