UPDATED: "There's a killer on your block"

Note: I have closed the comments for this post, because I'm concerned about the tone that has emerged there. To those who believe that we are casting a verdict in this case, please note that we simply wanted to show what we believed was a strange, and ultimately not productive, letter that we received. We fully believe in the presumption of innocence of anyone who has been accused of a crime. Mr. Kearney will have his day in court, and only then will innocence or guilt be determined. We have also made no judgments about the family, and will continue to remain unbiased observers of this story as it unfolds.

The deaths of Jamal Wilson and Joseph Alonzo Sharps, Jr., have been in the news quite a bit lately. The news hit close to home (literally) for us a few weeks ago when we heard the name of one of the accused in these crimes: Kwan Kearney. The Kearneys live down the street from us.

Things have been quiet on the block since the night that Kwan was arrested for these two homicides. News spread from neighbor to neighbor, and we've assumed that everyone nearby knows what has happened.

Apparently, though, someone wanted to make sure that we were fully aware of the situation. This arrived in the mail today: 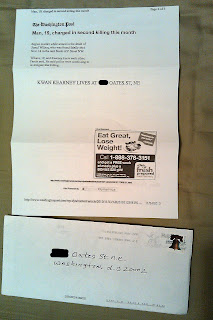 It's an envelope with no return address (and no recipient name, just our address), containing a photocopied printout of this Washington Post article. As you can see, a note was added in large, bold print, alerting us that the accused lives on our block.

The note should have said "lived," because Kwan is currently in jail awaiting trial.
Posted by IMGoph at 11:00 PM

New comments are not allowed.