Strange logic in the Current's endorsement 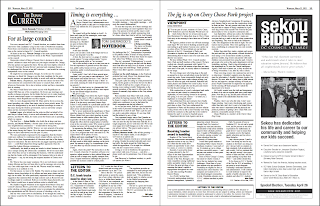 I've sung the praises of the Current Newspapers before. But last week's endorsement in the at-large council race was baffling, to say the least.

The editorial discussed five candidates for the office (Vincent Orange, Patrick Mara, Joshua Lopez, Sekou Biddle, and Bryan Weaver), and for the most part discussed the positives that they felt each brought to the table. Using a process-of-elimination-style rubric, they came to the decision that Bryan Weaver was the best candidate of the bunch...

...and then proceeded to endorse Sekou Biddle.

What would make them endorse a candidate they don't think is the best for the job?

The "logic" was that Bryan Weaver, though having the best grasp on the issues and being "the most knowledgeable challenger [they] have interviewed over the past 16 years," is not well known outside of his home neighborhood of Adams Morgan. Because of a higher profile, they endorsed Biddle. Not because of any belief that he'd actually be a better council member.

The Current's website claims a weekly delivery of 52,874 papers, and also claims that "over 95 percent of the adults who receive the Current on their doorsteps read it, one of the highest levels our circulation auditors have found in the entire country." If that's true, then upwards of 50,000 people read the editorial written last week. That would mean 50,000 people are now at least somewhat familiar with Bryan Weaver, and that's more than enough voters to win an the upcoming special election.

Of course, not everyone who read their endorsement will agree with it, and not all will even vote. But what is an endorsement if not a persuasive article? One can persuade without the object of the action being intimately familiar with the subject matter. In fact, a good persuasive argument would lay out facts for the uninitiated in such a way that they would feel both educated and convinced that the right conclusion has been reached by the one doing the persuading.

Either the Current's editorial board didn't really believe that Bryan Weaver is the best person for the job, or there is some other reason for making their choice. Claiming that he's not well enough known really isn't a sufficient excuse for declining to endorse. Part of the paper's job is to make the candidates known to the public.

Sekou Biddle's campaign has had a full-column advertisement opposite the paper's editorial for many weeks. As of the March 10th campaign finance filling, the Current had earned over $4,000 in advertising from the Biddle campaign. I'm not accusing the paper of a quid pro quo, but it's interesting that the they would sing the praises of one candidate, then turn and endorse the candidate whose campaign has spent more money than all others in their paper.
Posted by IMGoph at 11:57 AM