Rhode Island Reds is closing - want to buy it? 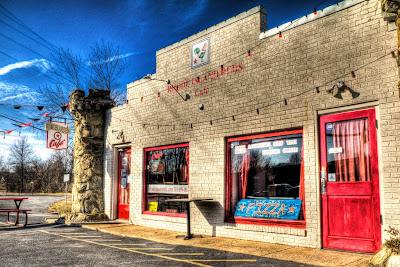 Photo by Chris Suspect on Flickr.
I spoke with Chris Brophy, the owner of Rhode Island Reds, an aweome cafe/restaurant/grocery in Hyattsville, and asked him to address this blog comment at the Rhode Island Avenue NE Insider, which said he's closing up shop today.

Unfortunately, he confirmed that it is true. There will be a "wake" tonight.

This is terrible news, as we've really enjoyed stopping in for a meal when biking along the Anacostia Tributary Trails. It's location on Route 1 at the southern edge of Hyattsville made it easy to access from DC, by both car and bicycle. The food is good and the atmosphere is relaxed.

Perhaps Rhode Island Reds won't stay closed for long, though. Chris also confirmed that everything is for sale at the starting price of $15,000. He said "this is probably the cheapest way into the food business in PG County if you know anybody."

Does anyone want to buy a restaurant operation in Hyattsville for cheap? I have to believe that there will be a lot more traffic in the area very soon, with even more restaurants, a grocery store, and homes opening up at Arts District Hyattsville in the coming months. The rent is cheap!
Posted by IMGoph at 12:09 PM