UPDATE: We received an update from DCRA regarding the demolished house. It turns out that DCRA authorized the demolition on August 25, 2010, and was finally able to perform it over the last few days. It took the agency months to determine ownership (the owners listed below have died), and dealing with the bank took time. The razing cost $30,000, which will be repaid by the bank.

The contractor that performed the demolition will clean up the mess, weatherproof the formerly shared (now exterior) wall of 1183 Neal Street, repair the retaining wall along the alley, and will repair any damage to the public space.

The DCRA citation noted that the structure was "in a state of imminent collapse and poses an immediate danger to neighboring properties and the public." The citation also stated that razing of the property was to begin within 120 hours, though this clearly was not the case, ultimately, due to ownership questions. 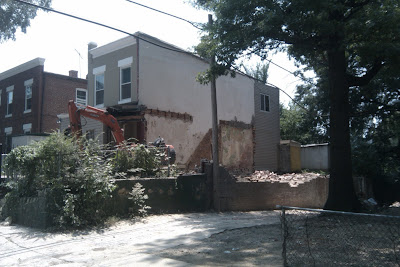 The house at 1181 Neal Street NE disappeared over the weekend.

1181 and 1183 Neal Street were small, twin rowhouses built in 1915. Only one remains, after the owners (Allen and Cloie Gibson, according to DCRA records) had 1181 demolished over the weekend. DCRA was surprised to hear that the house disappeared that fast, noting, "Well, that's one way for them to deal w/fines for grass/trash. No raze permits issued for that property. Will send inspectors."

There were more than $1500 worth of outstanding liens and/or fines owed to the city on the property, which it appears the owners hope will disappear along with the house. This is a classic case of demolition by neglect, in addition to demolition by heavy equipment.

DCRA confirmed that they have only about 25 inspectors to do building permit inspections, housing inspections, and to search for illegal work. In addition, it takes a LONG time to get fines issued and upheld on appeal. Those fines go into the general fund, and aren't necessarily used to hire more inspectors.

When the inspectors get to the property, I hope they can cite the owners for damaging the road and the alley as well. The picture below shows damage to the road surface from the heavy equipment used to tear the house down when it was parked on the other side of the street. 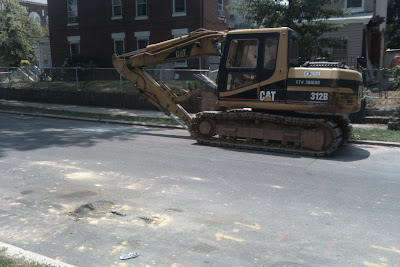 Here are a few more pictures of what's left of the property: 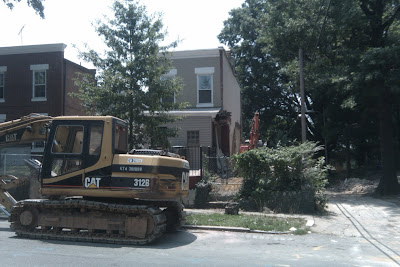 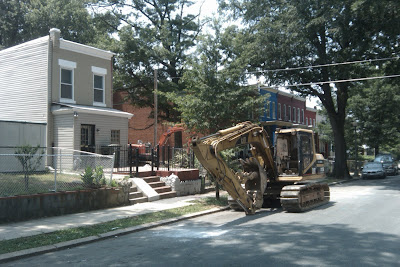 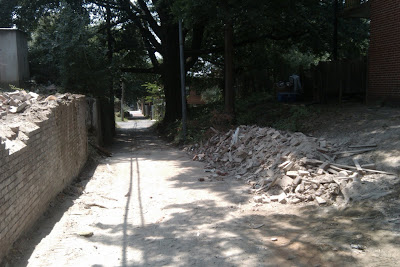 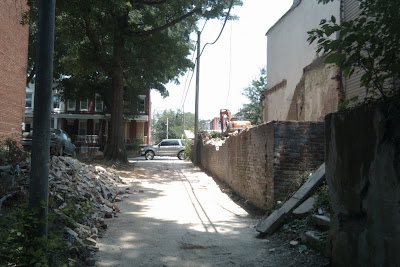 What will happen with this property now? One would believe that the owners should be punished for illegally tearing down a home that should have been maintained and put back into productive use, but I fear that they will profit in the end by building something new, quickly and cheaply, to take advantage of the rapidly heating up housing market in Trinidad.
Posted by IMGoph at 2:25 PM