To address bicycle crime, Metro PD should take it seriously 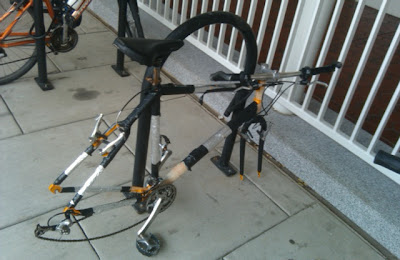 WMATA is trying to fight bicycle crime, the Examiner reported last week, and theft has declined somewhat this year. My experience with an a vandalized bike shows a few ways they can continue to improve.

On Thursday, September 22, on my way home from work and a community meeting, I stopped to pick up my bicycle at the New York Avenue Metro station. Nearby was another bicycle, with many of its parts missing, shown at right.

Crime needs to be reported, otherwise the police have no idea where they need to focus their attention. But when I called the Metro Transit Police Department (MTPD), the dispatcher told me that he couldn't take a report since I wasn't the bicycle owner.

I informed him that I had been able to do so before, and had called in multiple bicycles that had been similarly vandalized at that station. He promptly hung up on me.

The following Monday, while retrieving my bicycle after a day of work and community meetings, I ran into an MTPD officer at the station. He saw me approaching the bicycle racks and asked, "Is your bike still there?"

Sure, it was meant to be a joke to lighten the mood, but given the knowledge I have of what has been happening at the station and my most recent interaction with the MTPD dispatch, I didn't find it particularly funny. I told him, "Mine's fine, but I can't say the same for this guy," while pointing at the frame that remained locked up, sans wheels and gears, next to my bike.

The officer came over to look at it. He thought that the bike might have been stolen, locked up by a thief, and then vandalized by someone else. I told him about my attempt to call the crime in, and how the dispatcher rebuffed my plea for help. He mentioned that a sticker could be put on the bike (as in the photo below), then told me to have a good evening. 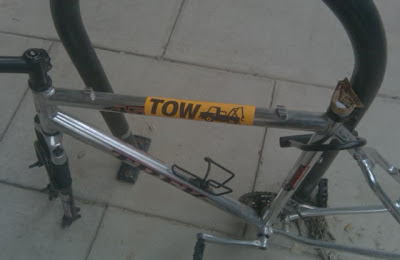 It's worth noting that the bicycle frame in the first photo was removed by Wednesday evening, but the one in the photo above has been there for weeks.

In the Examiner article, Metro Transit Police Chief Michael Taborn blames the victims of these crimes for allowing their bikes to be stolen and vandalized. "Many buy expensive bikes but buy inexpensive locks," he says, and while personal observation tells me that there certainly are bicycles that haven't been properly secured at the Metro station, there is also a lack of seriousness on the part of Taborn's force regarding crime.

If the attitude from the top of the MTPD is dismissive of bicycle-related crime, it's not surprising to see the rest of the force serving beneath him being apathetic about it as well. That's a real shame, and it's something that I hope will change. Blaming the victim and not accepting help from civilians when it's offered will keep MTPD from being as effective as it could be.

Cross-posted at Greater Greater Washington.
Posted by IMGoph at 10:21 AM