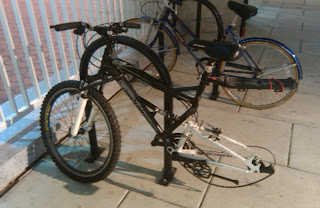 At the beginning of October, I caught a young boy in the act of stealing a bicycle wheel at the New York Avenue Metro station. Last night, I helped police finally catch him. But he wasn't arrested.

Jaime and I were taking a quick walking tour of NoMa with ANC 6C04 commissioner Tony Goodman when we saw the boy ride his bike past us. An extra bicycle wheel was hanging from the handlebars. I recognized him immediately, and called 911 to report what we saw. The police arrived a couple minutes later, took a report, and promised to check the area where we saw the boy going to see what they could find.

Ten minutes later, we were at the corner of 1st and M NE, in front of the CVS, when we saw the boy bike past us again. Jaime saw a police cruiser coming south on 1st Street, and I flagged them down. The police asked me to jump in, and we headed the wrong way down M Street toward North Capitol, where the boy was headed.

At the corner of M and North Capitol, we caught up to him. The officer driving the car chirped the siren, and pulled to the curb when the boy started biking faster. Both officers (from the 1st District) got out of the car and started questioning the boy about the wheel we had seen him carrying minutes earlier.

He denied knowing anything about it. The officers talked to him for a few minutes until a gentleman showed up. It turned out this was the boy's father. More questioning eventually led the boy to admit that the wheel was in his room in their house. His father sent him home to bring it back to the police.

It turns out the boy was 13. The police didn't arrest him, and I don't know what his father did or said after we drove away. I hope that he realizes what he's been doing is wrong, and I hope (at least) he really knows he's being watched now.

Remember, keep using a cable lock and a u-lock when you park at the New York Avenue Metro station. Don't leave a wheel unlocked where this boy, or anyone else for that matter, could walk away with it and take it home.

Crossposted at Greater Greater Washington.
Posted by IMGoph at 11:49 AM