Updated Ward 5 redistricting map from the DC Office of Planning

This is the map that was just released from the Office of Planning.

When compared with the map that was shown as an example of how to create near-equal sized SMDs on Greater Greater Washington, there are only minor changes. 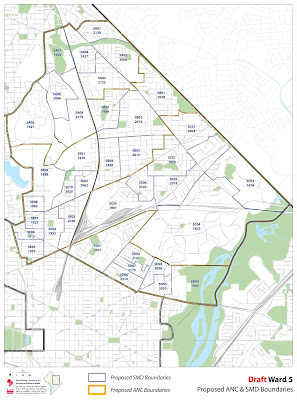 This is the map that will be voted on by the D.C. Council on December 20th.

This is the map that was posted on Greater Greater Washington last month.
Much thanks go out to Councilmembers Harry Thomas, Jr., Michael A. Brown, Jack Evans, Phil Mendelson, and their staffs for working so diligently on the redistricting process in our ward. It's great to see that we're looking at SMDs that make more sense.

The full council will be voting on this map (and the ones for the other seven wards) next Tuesday, December 20th.

If you support these changes, I'd encourage you to send a note to the councilmembers letting them know you approve of this map. Their emails are available on the Council website here.
Posted by IMGoph at 3:12 PM